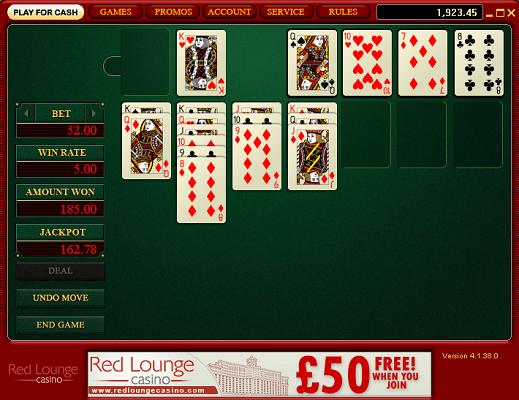 Cryptologic, Grand Virtual, Kismet / Cantor Gaming, and 3Dice softwares offer casino solitaire in which you win a fixed portion of your initial bet for each card moved to the foundation piles. With a possible player edge and a reasonable variance, the game can be useful for bonus play. However, play is far slower than other casino games, and there is no known optimal strategy.

Casino solitaire is played with a single deck of cards. After selecting a bet, the cards are dealt. 24 cards go into the draw pile, which is called the "stock pile." The remaining 28 cards are placed in 7 columns of length 1, 2, 3, 4, 5, 6, and 7. The top card in each column is face up, and the remaining cards are hidden.

The cards in the foundation piles are grouped according to suit and must be placed in order of increasing rank. An ace is the lowest rank card, and a king is the highest rank card. So the first card in a foundation pile must be an ace, and the final card must be a king. Only the visible cards at the top of the columns and the visible card at the top of the stock pile can be moved to the foundation columns. To access and reveal the hidden cards, you can move cards from one column to another, so long as they are ordered by decreasing rank and alternating suit color. If a red king is the visible card at the top of column, a black queen can be placed on top of it. After the black queen is the top card, a red jack can be placed on top of it, and so on. Each time you move a card, the trail of descending cards are also moved. If a column is empty, a king can be moved to the space, starting a new column. You may also move cards from the stock pile to columns or to the foundation piles. If you cannot or do not wish to make a move, you have the choice to discard the top card in the stock pile and use the card below it. If you play the new top card, your discarded previous card becomes the new top stock pile card again.

An "undo" button is available, which can be a useful tool. It's specific function varies between softwares. With Cryptologic software, the undo button undoes the previous one move. This includes a stock pile discard, but not turning over a column card. By discarding a stock pile card and undoing the discard, a player can peek at the next card. The Kismet undo button also undoes one move, but cannot undo stock pile discards. The Grand Virtual undo button undoes any number of moves, until the last card reveal.

If you haven't played solitaire before, these rules are likely not clear. I recommend playing some rounds in practice mode to get a feel for the game before playing for real money.

Jackpot -- Kismet Jackpot Vegas Solitaire gives a progressive jackpot bonus, if you successfully move all 52 cards. The size of this jackpot varies over time and depends on your starting bet size as well.

Golf Solitaire -- Grand Virtual offers a game called "Golf Solitaire," which involves placing cards in a long sequence of either increasing and descending ranks. If you are able to place at least 48 of the 52 cards in the sequence, you get a payout.

A summary of rule variations and estimated house edge is below:

This paper from Stanford University suggests that nobody knows optimal strategy or optimal house edge for casino solitaire. Some general strategy tips are below:

1. When stuck, consider using the cards from the foundation pile and swapping cards between hands. When few cards are left to a win, you can isolate missing suit cards to a particular column.

2. Think as many moves ahead as possible, instead of just the current play.

4. Do not clear a column unless a king is available to move to the empty space.

Grand Virtual's Golf Solitaire game has a more deterministic strategy. Using a computer, one could determine the choice at any point with the best chance of completion. A basic strategy is to count the number of moves with each possible choice, and choose the one with the highest value. A more complex strategy is to start backwards and look at the combinations of stock pile cards that can complete the sequence, then work your way to the start. This would be difficult with out a computer.

As stated above, the house edge of solitaire with optimal strategy is unknown. With my style of play, I average ~10.5 cards moved to the foundation piles. I have not played enough games for this to be a precise figure. 10.5 cards results in a house edge of ~4.5% with Grand Virtual 1-Card Casino Solitaire, ~0% with Cryptologic Casino Solitaire, and a significant player edge with Kismet Jackpot Vegas Solitaire. The size of the edge on the Kismet game varies with the size of the jackpot. The CEO of Kismet has confirmed that the game may have a player edge by saying, "This is an interesting game for players as there is no known mathematical model which predicts the payout rate for Solitaire. With the progressive jackpot, simulations suggest that expert players may have a slight advantage over the house."

Based on personal play, I estimate a standard deviation per game of 0.95... similar to baccarat and significantly less than blackjack.

With typical solitaire games, most sessions have a net payout that is between 40% and 100% of the original bet size. The maximum win is usually ~5x the original bet size (not including progressive jackpot bonus) and occurs in the rare cases where you complete the game and move all 52 cards to the foundation piles. You are expected to lose several betting units before completing the game and getting the big ~5x win.