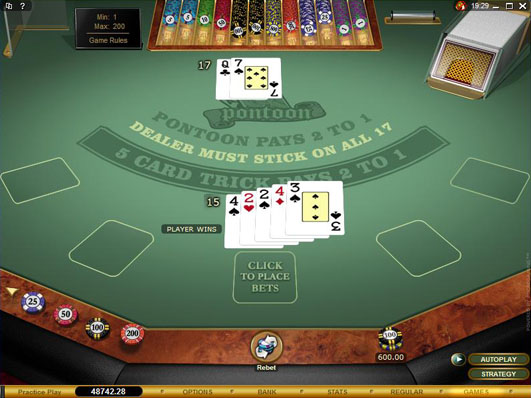 -Blackjack is called "pontoon" and pays 2:1. This is the highest ranking hand.

-Any 5 card hand pays 2:1. This is the second highest ranking hand.

-Pushes are treated as losses.

-None of the dealer cards are visible until the hand is completed.

-The player may hit after a double.

-The player may double on 3 or 4 card hands.

-The player may hit and double split aces.

-A 2-card 21 after splitting aces is treated as a pontoon (blackjack).

The table below shows optimal strategy with standard rules, which are used by Playtech, Net Ent, Cryptologic, Real Time Gaming, Orbis, and Gale Wind. "Number of Cards" refers to the number of cards in your hand. Optimal strategy changes as the number of cards increase because 5-card hands pay 2:1. Microgaming Pontoon does not allow players to hit multiple cards to split aces, resulting in a single difference from the table below -- hit a pair of aces, rather than split.

The house edge gains and losses due to the rule changes from traditional blackjack offset each other, so the house edge of pontoon is similar to traditional blackjack. It is 0.38% with standard rules, which are used at Playtech, Cryptologic, Orbis, and Gale Wind (H17, 8 Decks), 0.39% with Microgaming rules (S17, 8 Decks, 1 card to split aces), 0.41% with Net Ent (H17, 6 decks), and 0.73% with Real Time Gaming default rules (H17, 2 decks). Real Time Gaming casinos allow operators to configure the number of decks. The house edge is 0.38% at RTG casinos that choose to use 8 decks, rather than 2. The above house edge estimations are based on Wizard of Odds' analysis with confirmation from an independent simulation.

The table below shows the chance of ending above the deposit balance with unlimited bankroll, after completing a wagering requirement with 4 bet sizes. See the Return & Variance Calculator for more specific estimates.