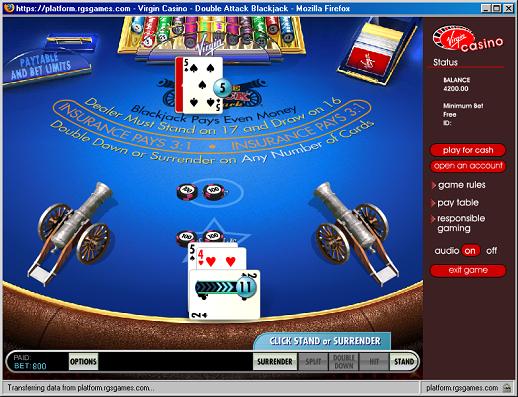 Traditional blackjack rules are used, with the following modifications:

-After the dealer's first card is dealt (before player cards are visible), the player has the option to double his initial bet ("double attack").

-The player may double down or surrender on any number of cards.

-The player may surrender after doubling or splitting, as well as at the start of the hand.

Under Wagerworks rules, insurance pays 3:1, making insurance slightly favorable (unlike traditional blackjack). Buy insurance unless 10-cards (J-K) are visible. So you'd buy insurance on 9/9 vs A, but not on J/8 vs A.

Wizard of Odds lists a house edge of 0.62% under standard (Playtech) rules. I estimate the house edge (defined per initial bet) of Wagerworks to be 0.64%, when using the strategy above. The average bet size is 1.8x the initial bet, making the house edge per unit wagered 0.35% under Playtech rules and 0.36% under Wagerworks rules. The latter value of 0.35% is more appropriate to estimate expected loss over a wagering requirement. The large difference between house edge per initial bet and per unit wagered relates to the many raises for "double attacks."

I estimate the standard deviation (defined per initial bet) of Wagerworks Double Attack Blackjack to be 1.73, making the standard deviation per unit wagered 1.29. The latter value of 1.29 is more appropriate for estimating range of return while completing a wagering requirement. Note that the variance is much higher than standard blackjack. See the return & variance calculator for estimating range of return for a specific bonus.