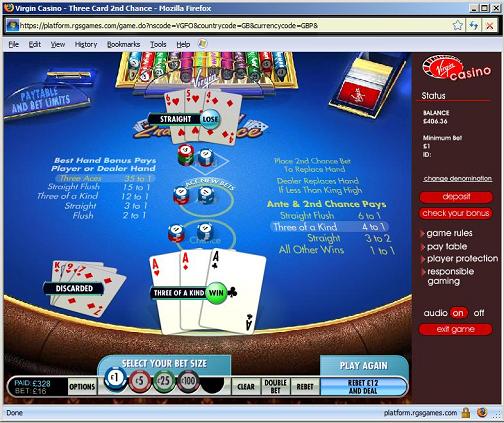 Three Card 2nd Chance offers an optional Best Hand sidebet with a maximum bet of 2x the initial ante wager. Unlike nearly all other sidebets, the Best Hand sidebet is a desirable option. The sidebet pays, if either the player or dealer has a flush or better, according to the paytable below.

When not making a sidebet and using the main bet strategy of standing on KT2 or better, the house edge is 3.56%. The player raises 50.2% of the time, resulting in a house edge per unit wagered of 2.37%.

When estimating variance over a wagering requirement using the return & variance calculator, enter a bet size that is the sum of the ante bet and side bet. If you were betting 1 unit on ante and 2 units on the sidebet, you would enter a bet size of 3.